Two-division world champion and Philadelphia’s own Danny “Swift” Garcia held a media workout in his hometown on Wednesday as he prepares to make his 154-pound debut against exciting contender Jose Benavidez Jr. on Saturday, July 30 headlining live on Showtime from Barclays Center in Brooklyn in a Premier Boxing Champions event.

A world champion at 140 and 147 pounds, Garcia will return to the friendly confines of Barclays Center in Brooklyn for his super welterweight debut. Garcia will fight at Barclays Center for the ninth time, which includes a 2012 knockout victory over Erik Morales in the arena’s first boxing main event.

Here is what the workout participants had to say Wednesday from the DSG Boxing Gym:

“Training has been going great. We’ve been in the gym for three months straight so we’re towards the end now and we feel fantastic.

“The time off was very important. After you’ve been fighting for a long time, I’ve been fighting world champions for the last ten years, I realized that my body felt great, but my mind felt foggy. It felt tired. It didn’t feel sharp. I knew that I needed my mind to rest, have some fun, and spend some time with my family. I needed time to enjoy everything that I worked so hard for, start to miss the game of boxing and then come back strong. I think that’s what I’ve done.

“Benavidez is a tough fighter. He has some skills. Obviously, he’s 27-1-1 and he’s fought some good fighters. I expect the best of him.

“I want to knock him out but if the knockout doesn’t come, then we’re ready for 12 rounds. I just want to go in there and give the fans a great show. 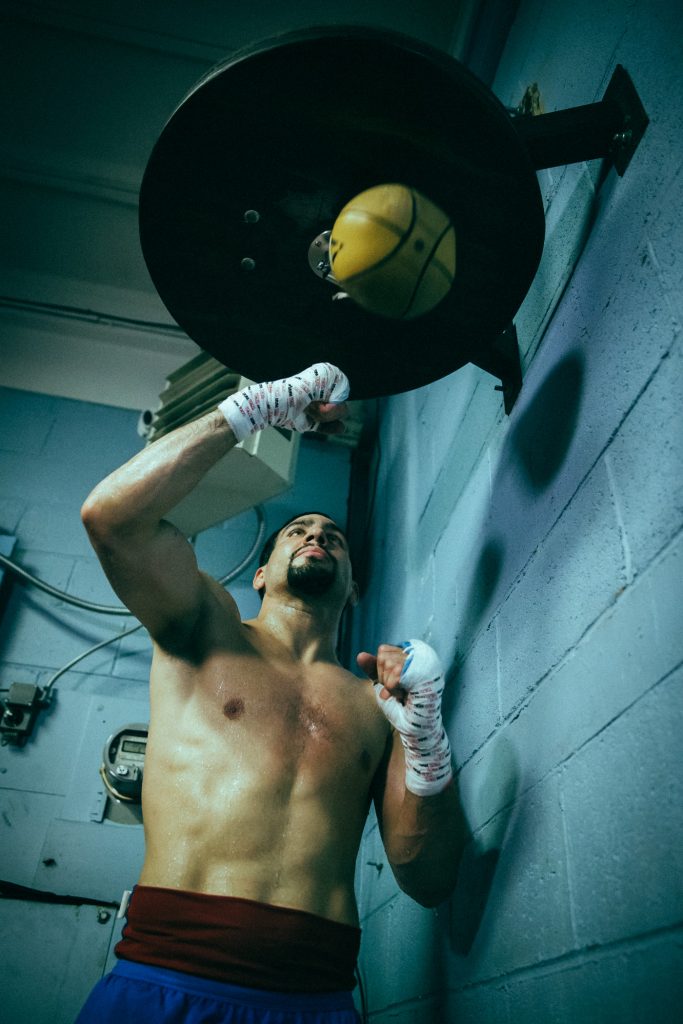 “I always knew that 154 was my walk-around weight. A lot of people think I’m naturally small because I used to fight at 140 and 147. But I was squeezing myself down to get to those weights. Now I’m a little bit older, a little bit wiser. I don’t think that’s the right thing for me to do to lose all that weight.

“2020 was a good and bad year for me. I fought twice and made a lot of money, but at the same time, there was the pandemic. It was a tough year for me outside of the ring. It was stressful for everybody. I just needed a break. I was tired. I trained hard at the beginning of the year and then we went through the pandemic. I had to wake myself up to train hard again for one of the biggest fights of my career. It just took a mental toll on me. I was mentally tired. I banged it out with Spence. He got the decision, but I was still able to go in there and scrap for 12 rounds. I knew if I just took a break and came back, nobody could touch me.

“I would definitely want to revisit the Spence fight at 154 pounds. We have history already. Once I start looking good at 154, there’s going to be a lot of great fights for me.

“You know what’s crazy? You miss the smell of the gym. When you haven’t been in the gym in a while and you walk in the gym, it’s like your mom’s home-cooked food. I missed this.”

“Jose Benavidez Jr. is not a skillful fighter. He can’t fight going backwards. He doesn’t have any skill. He doesn’t dip. He doesn’t slip. He doesn’t duck hits. He just comes forward, I guess. I don’t know what they’re teaching him. I teach perfection. I don’t teach just going in and getting beat up.

“Danny did great fighting at 147 pounds. The Keith Thurman and Shawn Porter fights could have gone either way. And then the Spence fight, we were going through a lot of changes because of COVID. I’m not trying to sugarcoat anything. I’m just being honest. Danny was suffering from anxiety leading up to the Spence fight. There was too much going on. We had a difficult camp. I’m not making excuses. But he still did great and he still threw 750 punches.

“A happy Danny Garcia is a dangerous fighter. He’s looking great right now and he’s ready to show everybody he’s back.

“It’s always the ‘Danny Garcia Show’ when we come into Barclays Center. Everyone knows it’s going to be an exciting night and July 30 is definitely gonna be the same.”

“Don’t forget, we were supposed to fight Spence in March and then he had the car accident. So instead, we fought Ivan Redkach. But if the Spence fight would have gone down that day, Spence wouldn’t have had a victory.”

A press release by Showtime/PBC has been used in this article.

Jose Nieves, bantamweight primarily based in NJ, desires to be the subsequent boxing star from Puerto Rico

Jake Paul, boxing, and the combat that wasn’t