Joet Gonzalez, a two-time title challenger, and Isaac “Royal Storm” Dogboe, the former WBO junior featherweight titlist, were in a fight for relevance on Saturday night at the Grand Casino in Hinckley, Minnesota.

The 27-year-old Dogboe, whose career was considered over by some, was looking to make more headway as a featherweight, while the 28-year-old Gonzalez needed to prove he was still a viable featherweight contender after going 2-2 over his last four fights.

Working with trainer Barry Hunter, in a 10-round WBO featherweight title eliminator, Dogboe (24-2, 15 knockouts) narrowly got by with a split-decision victory over Gonzalez (25-3, 15 KOs).

It marked Dogboe’s fourth-straight victory, all at featherweight, and all under Hunter, while Gonzalez lost for the third time in his last five fights.

“I said to the people that my journey can be a Hollywood blockbuster movie, and I praise God always,” Dogboe said. “I’ve always seen Barry as a very inspirational person, a father figure. He’s a person that when it seems like it’s all gone, he always has something to say to you. I really needed him in my corner. He was able to pull that extra strength in me out. I want to say thanks to Joet Gonzalez. He’s a true warrior.

“Whoever the champions are, they should watch out. The ‘Royal Storm,’ I am back, baby!”

Over the first three rounds, Dogboe was in control. He started boxing, successfully moving in and out of the pocket, burrowing in on the taller Gonzalez and escaping before Gonzalez could retaliate. But in the fourth, Gonzalez buckled Dogboe’s knees with an overhand right.

“I should have stepped on the gas a little more,” Gonzalez said. “He’s a shorter fighter and I changed my height and reach, but he wasn’t coming in. I noticed when I was pressing, he was backing up and I was landing some shots, I knew my game plan was to move forward.

Gonzalez had another strong sixth, backing up the smaller Dogboe. That seemed to tighten what appeared to be Dogboe’s early lead. He began letting his hands go more consistently and using his length.

After eight, it was easy to see the fight even.

In the co-feature, southpaw lightweight Giovanni Cabrera (21-0, 8 KOs) scored the most stunning victory of his young career with a 10-round unanimous decision victory over Gabriel Flores Jr. (21-2, 7 KOs), marking the second defeat in the third fight for the once-promising 22-year-old from Stockton, California. 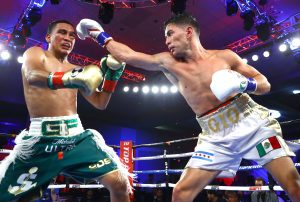 “It felt amazing, this is what we worked on in the gym,” said Cabrera, who is trained by Hall of Famer Freddie Roach. “Gabriel Flores is as tough as they come. Everyone could see that I’m a very slick boxer. I’ve been working on my power and he felt it in the first round.

“I want to continue making exciting fights. I believe that I’m one of the best in the world and it’s been my dream to come for the championship of the world. I believed I showed tonight that I’m on my path to do so.”

Cabrera knocked down Flores three times, twice in the first and once in the fifth. On the first punch within the first seven seconds of the fight, Flores was down by a straight left. Cabrera, who’s really not noted for his power, scored a second knockdown a minute into the fight. Within a blink, Flores was in serious trouble.

Flores took 144 power shots during the fight. Cabrera, who won 98-89 across the board by the judges, landed double digits in every round.

“We’re hoping for a rematch because we know that’s somebody we can beat. All the mind games before the fight, it’s just boxing. I don’t mean (any) disrespect. At the time I do, because he’s my enemy. After, it’s whatever. I would love a rematch. I need it. This is my last loss.”

By the fifth round, Cabrera owned a 69-23 punch-connect edge. In the closing seconds of the fifth, Cabrera knocked down Flores a third time, and had landed 77 power punches by the sixth.

Flores did not help himself. He stayed in a straight line getting hit repeatedly by the same straight left. Through nine rounds, Flores had absorbed 123 power shots. 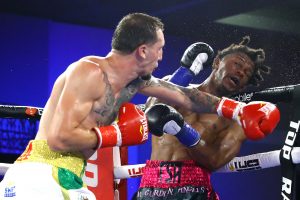 On the undercard, middleweight Javier “Milwaukee Made” Martinez (7-0, 2 KOs) remained undefeated and in the process handed Chino Hill (7-1-1, 6 KOs) his first defeat as a pro winning by unanimous six-round decision.

Joseph Santoliquito is an award-winning sportswriter who has been working for Ring Magazine/RingTV.com since October 1997 and is the president of the Boxing Writers Association of America. He can be followed on twitter @JSantoliquito.

JoJo Diaz and William Zepeda face off in high-stakes matchup on Nov. 5