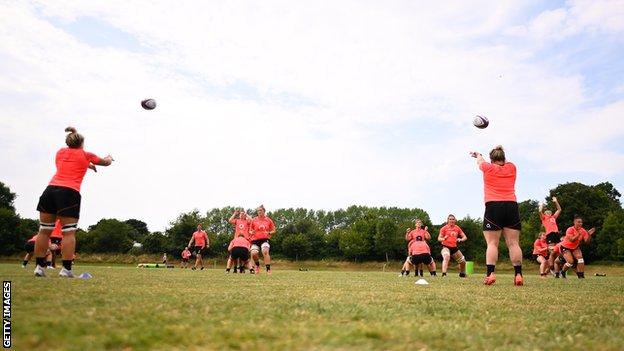 From August, girls’ rugby union players in England will be split into four separate age bands at youth level.

Many have welcomed the change hoping it will retain girls who were previously “daunted” playing U18s from age 15.

However, some clubs have told BBC Sport that the increase from three to four bands puts “enormous pressure” on them.

Lou Latter, women and girls representative on the Rugby Football Union council, said: “This is a really, really positive thing for girls’ rugby.

“We know that people aren’t comfortable with change, for me this is just a good sign of where the sport is going.”

What are the changes?

The previous age bands for girls were Under 13s, Under 15s and Under 18s.

What has been the reaction?

Many have welcomed the new age bands after concerns that the old Under 18s group was too wide.

Angie Hurren, Exeter Saracens girls’ team manager, told BBC Sport the old jump from U15s to U18s “often resulted in girls leaving” and they are hopeful that the new bands will be “less daunting”.

Exeter Saracens U16s head coach Steve Sycamore added: “I’ve already had girls tell me that they plan to stay because they’re not going up to the U18s yet.”

With 100 affiliated girls, Exeter Saracens have one the biggest girls’ sections in Devon.

Their junior chairman Martyn Goldsborough says the club’s investment in their girls’ section is reaping rewards.

“It has been excellent to see the growth of the girls’ game over the past few years and I hope that this growth continues throughout the upcoming seasons and into the future as this upsurge in girls’ grassroots rugby can only benefit our senior, county and international teams in the long term,” he said.

“Junior sections of rugby clubs rely heavily on parents stepping in to assist with running teams.”

Mills added that the pandemic “has seen clubs having to build their numbers again so maybe this has come too soon, another season may have helped clubs.”

The review into the age bands started in 2018 and the RFU told clubs in November 2021 the changes would start this season.

Mills is happy with the principle of closing the gap at the top age band to avoid the situation where girls feel “intimidated by a large gap”.

Latter explained that the old U15-U18s bands were deemed “a big jump for girls” and “we were just asking too much of players.”

“The main thing is they are enjoying playing their rugby”

She went on to add that the consultation did look at banding girls around height and weight but there needed to be a bigger “focus on the mental maturation”.

“You could have a 13-year-old that could be competing physically with 17-year-olds but mentally she’s not mature enough to be playing in that size and age group.”