British star Chris Billam-Smith came through fire to win a hard-fought 12-round unanimous decision over countryman Isaac Chamberlain and retained his Commonwealth and European cruiserweight championships at the Bournemouth International Center in Bournemouth, England, on Saturday. All three judges scored the bout 117-111.

Initially, the respective styles didn’t gel. It was a messy opening round devoid of clean effective punching and it looked like the fans were in for a long night.

That all changed in Round 2.

A right hook-left hook combination hurt Chamberlain, then Billam-Smith was stunned by a left and a strong follow-up attack. Not to be outdone, Billam-Smith returned fire, rocking his man with a sharp left of his own. It was a terrific three minutes that set the stage for the remainder of the fight.

The action predominantly took place on the inside. Both men are known for packing a punch and the bout was fast-paced with plenty of contact. Billam-Smith appeared tired by the midway point, but, ironically, he always seemed to work harder and force out the punches.

It was a battle of attrition and Chamberlain’s lack of activity over the past four years (just six rounds of action) didn’t help his cause. He fought like a warrior, putting forth an inspiring drive in the closing seconds of the final round, but Billam-Smith was a worthy winner in a great battle.

“What an unbelievable fight,” said the champion. “Isaac’s a warrior, I knew he was. I knew when to ease off and go again. I’d give him a little bit of success, then take it away from him and break his heart.” 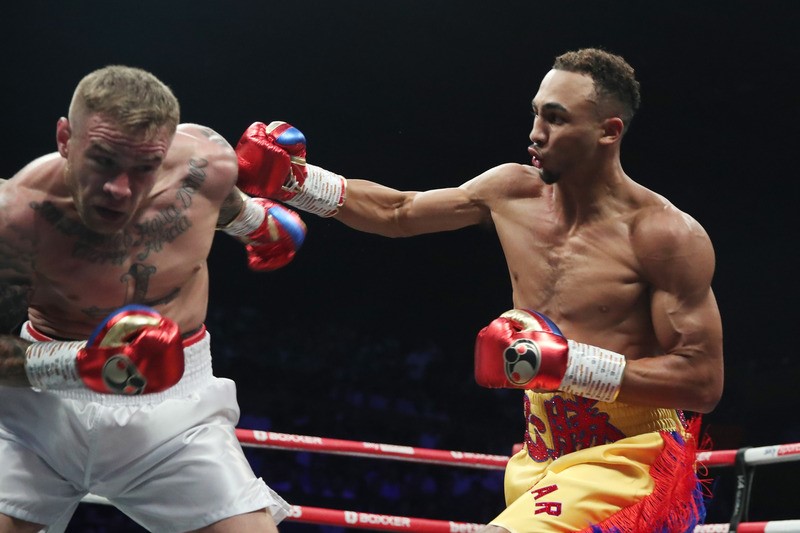 Olympic silver medalist Ben Whittaker made a successful and exciting start to his professional career by scoring a second-round knockout of Greg O’Neill at light heavyweight. The official time was 0:21.

The 25-year-old Whittaker, who is trained by SugarHill Steward, released showboat-style uppercuts and bolo punches in a dominant first round.

Early in the second, a sharp right cross put O’Neill down for the count.

The visitor scored with a right hand bomb in the first, but he didn’t get the chance to build on it.

Near the end of Round 2, Clark caught Bracamonte with an explosive left hook and the 309-pound Argentinian went down hard. He found his his feet, but referee John Latham waved the bout over.

Jose Nieves, bantamweight primarily based in NJ, desires to be the subsequent boxing star from Puerto Rico

Jake Paul, boxing, and the combat that wasn’t