BROOKLYN, NY — The threshold he held so diligently was bound to break. Danny Garcia tried keeping it bottled tight, tried to comport himself as if everything was okay, everything was smooth, and usually did it barrowing the smiling face he kept in a jar by the door.

It worked well for a few years.

Though to those who knew him and loved him, they knew what was going on. They knew “Swift’s” emotional boundaries would eventually collapse, that his burgeoning anxiety would burst open.

That’s what happened on Saturday night, when Garcia came back from a 19-month, 26-day layoff to win a majority decision over Jose Benavidez Jr. on the Showtime tripleheader from Barclays Center, in Brooklyn, New York, in a Premier Boxing Champions event.

There were no signs of ring rust from the 34-year-old Philadelphia fighter making his junior middleweight debut.

“I did take a break, I was going through some mental things, I felt a little dark,” admitted Garcia, before breaking down to Showtime reporter Jim Gray. “I went through some anxiety and depression and I tried to do my best to stay strong.

“I think it was the pressure of life, the pressure of boxing, being a good dad. I’m letting it out right now, because I kept inside for a year-in-and-a-half. I still battle some days. I have some dark days, but I feel good now.” 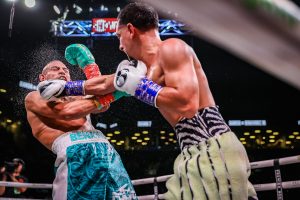 This was a case of if you saw one round, you saw them all. The times Benavidez would initiate an attack, Garcia was not there. Swift countered Benavidez slammed him to the body and worked well up and down. Benavidez did not where Garcia would attack.

Neither of the two were able to hurt each other, and it was truly a virtuoso performance by the two-division former titlist.

“In order for me to be Danny Garcia, I had to be back in the ring and do what I love, to be a fighter,” Garcia said. “People ask me every day, you make good money boxing, why do you still fight? I feel like I’m a fighter, this is what I love to do.

“Hopefully, I don’t become a meme with my crying face like Michael Jordan.”

In the sixth, Garcia initiated the action with double jabs, controlling the pace and the distance. Benavidez’s frustration appeared to be growing as he yelled at “Swift” at the bell.

By the ninth, Benavidez snuck some rights in, though he still could not break the rhythm of Garcia, who went back to working the body and mixing that with head shots.

By the 10th, Garcia was back in control.

Sensing he had to win by knockout, Benavidez tried going after Garcia in the final round, and in the last minute, he lifted both of his hands in frustration as if to say, “Why don’t you stay here so I could hit you!”

Garcia stayed in boxing mode. With :13 left, Garcia showboated a little for the crowd, swirling his right hand around as the final seconds ticked away.

There was no urgency on the part of Benavidez.

“I’m happy with my performance, I thought I did a good job,” Benavidez said. “I’m fighting one of the best of the best. I took his punches. You see it didn’t hurt me. I honestly thought that I had won, but it is what it is. I’m not going to let this bring me down. A loss just makes you stronger.”

Joseph Santoliquito is an award-winning sportswriter who has been working for Ring Magazine/RingTV.com since October 1997 and is the president of the Boxing Writers Association of America. He can be followed on twitter @JSantoliquito.

The Beltline: Adrien Broner, boxing’s drawback little one, accepts he has an issue