Days after Australia was gripped by a savage rugby league contest, England are ready to prove that fire-and-brimstone brutality exists in union too, as they strive to clinch series glory with another show of force.

On Wednesday, this country came to a stand-still for the State of Origin decider between Queensland and New South Wales.

Queensland triumphed and it was hailed as a shuddering oval-ball classic which has resonated on the other side of the cross-code divide, ahead of a winner-takes-all showdown at the Sydney Cricket Ground on Saturday. 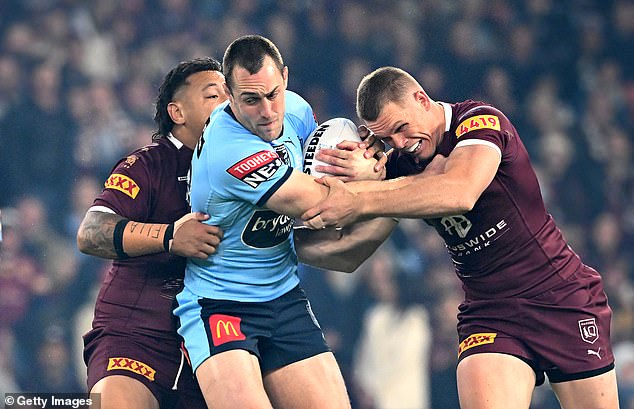 Days after Australia was gripped by a savage rugby league contest, England are ready to prove fire-and-brimstone brutality exists in union too, as they strive to clinch series glory in Sydney 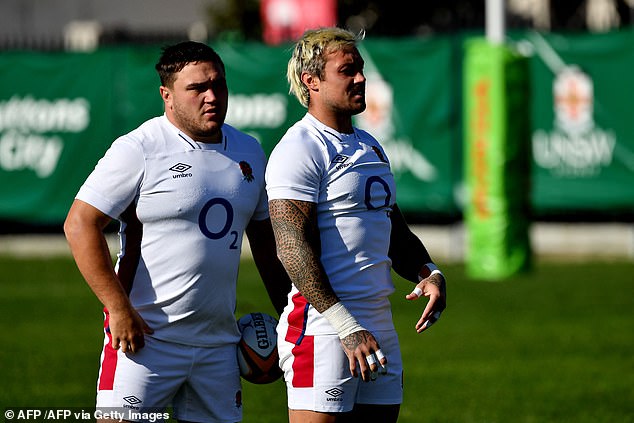 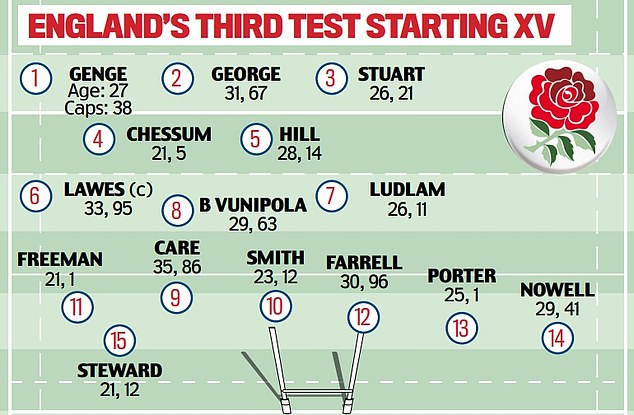 There shouldn’t be any shortage of chat and chirp in this individual duel between wily scrum-halves.

White has aggravated England with his claims of dirty tricks, but is also the heartbeat of the Wallaby side.

Care is back as a veteran and is an assured presence for the visitors. He is a man capable of adding precious attacking urgency.

This head-to-head was a focal point last week and it should be again.

Genge was fired up by the thought of being slighted by his front-row rival and went on to lead the cavalry charge up front for England.

But Tupou scored a try on his return for the Wallabies and is a heavyweight threat. A big scrum and carrying battle awaits.

Last week in Brisbane, Farrell relished ripping the ball from Kerevi’s grasp, a feat few have managed to achieve against the Wallabies’ wrecking ball.

If you can stop Kerevi, you go a long way towards stopping Australia as a whole.

This is not a like-for-like contest, but both men are absolutely vital to their teams’ chances. Kerevi has tried to develop a kicking game, while Farrell’s points are vital for England in their quest for victory.

England plan to channel similar passion and intensity to shock the Wallabies again.

With victory, they will win the new Ella-Mobbs Trophy as a reward for turning around a 1-0 deficit.

Last week, it was Richard Cockerill who issued an eve-of-Test statement of intent which his pack backed up in fine style on the way to victory in Brisbane.

On Friday, England’s forwards coach was at it again, to leave the hosts in no doubt about the ferocity coming their way.

‘We have two teams who are playing for the Test series so we are both going to be going at it,’ said the former England hooker.

‘They’ve talked themselves up, so we are going to have to match that and more. We are going to come with more physicality and with even more purpose.

‘It’s all on the line. We lost the first Test, everyone wrote us off and we were under pressure.

‘Under-pressure English teams come back really well and the boys were unbelievable in Brisbane.

‘We are looking forward to it. You want rivalry, don’t you? You want spikiness to games.

‘I don’t watch rugby league, but I watched Origin because they were going to run into each other like mad men.

Jamie George and his fellow England forwards must withstand a backlash from the Wallaby pack.

‘We know Dave Rennie and Michael Hooper are going to be pumping those guys up, making sure they come out firing,’ George said.

‘They’ll have steam coming out of their ears. No problem. We need to be aware that they’re a hurt animal.

‘We experienced a loss in the first Test and we know how it feels. We know the reaction it invokes. We don’t worry ourselves too much with that.’

This series has been gently simmering.

Last week, Taniela Tupou’s comments about Ellis Genge managed to antagonise the England prop so much that he turned his fury on to Australia with a thunderous performance.

This week, Wallaby scrum-half Nic White’s claims of English ‘dirty tricks’ have lit another fuse in the visitors’ camp. 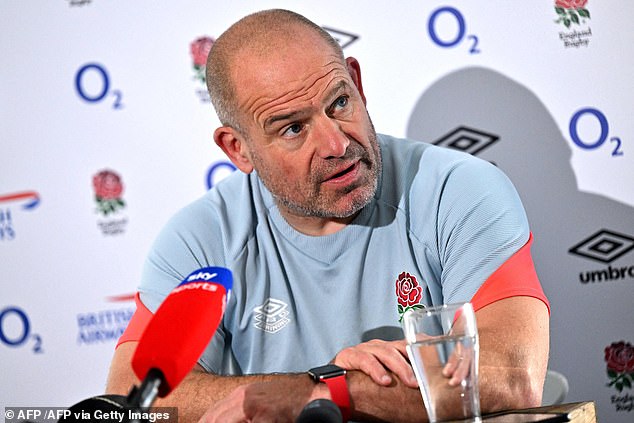 Last week, Richard Cockerill gave a statement of intent which his pack backed up in fine style – On Friday, he did it again to leave the hosts in no doubt about the ferocity coming their way

The former Exeter player suggested that England have been guilty of pre-meditated wind-up tactics but Cockerill’s retort was: ‘I didn’t see one of our blokes getting sent off for a head-butt.’

That was in reference to the incident which saw Australia lock Darcy Swain dismissed in Perth, after Jonny Hill had shoved him in the face and pulled his hair.

‘We don’t want to give away silly penalties, but we don’t want to hold the guys back either,’ added Cockerill. ‘I keep hearing about the niggle that England have brought. I don’t know how Aussie rugby is, but I don’t see that as niggle. It has been pretty tame.

‘We just have to get on with our game with a good set piece, tackle hard, clean rucks, be as physical as we can, abrasive as we can and be within the laws of the game.’

An explosive contest is in prospect and it will require one final, herculean effort from a shattered England squad, at the end of a gruelling season. It is their last game before a well-earned rest. 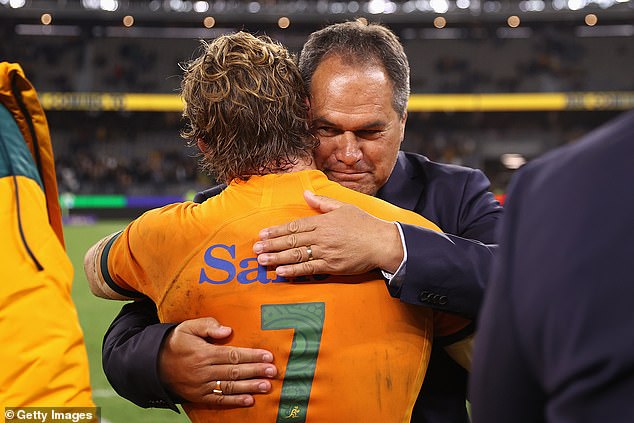 Hooker Jamie George said he expected Wallabies captain Michael Hooper (left) and head coach Dave Rennie (right) to send the players out firing, with ‘steam coming out of their ears’

It will be fascinating to see if England go hard and direct again, as they did for the majority of last week’s match.

Or whether the selection of Danny Care to start at scrum-half hints at a revised plan to run the Wallabies off their feet.

If it does become another punishing arm-wrestle between the sides, here’s hoping that there are not more concussions and broken limbs which have scarred this series so far.

Eddie Jones’s side need to reignite the fire within, but this time they won’t have quite the same level of desperation to fuel it. The pressure has eased after the Brisbane win, but the stakes remain high.

For all their improvements under Rennie, Australia are not yet a formidable force, especially without Quade Cooper and Will Skelton. 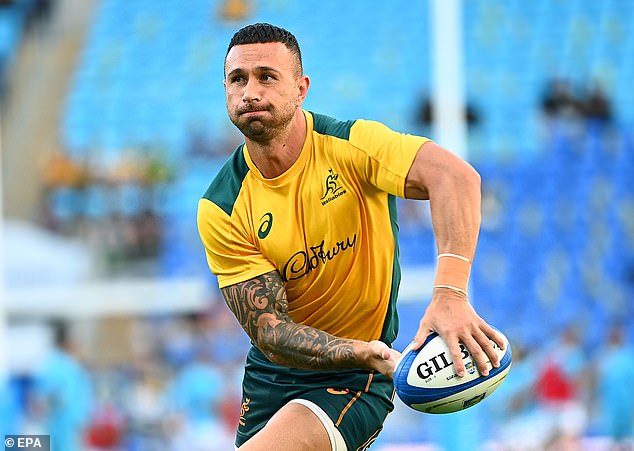 For all their improvements under Rennie, Australia are not yet a formidable force, especially without No 10 Quade Cooper (above) – so England should now be expected to seal the series

So England — as diminished as they are by a long casualty list — should now be expected to harness fresh momentum and seal the series.

Ideally, the outline of a clear plan should be taking shape too by now, with just over a year until the next World Cup in France.

Others are ahead in the evolutionary curve, so England need to catch up, in terms of sifting personnel and honing a tactical blueprint.

Quite right. If England finish the job here, it will salvage their season.