Fight weeks can be repetitive for all concerned. There are only so many ways you can talk about beating someone up, and in the days leading up to a big fight, the participants become tired of the old routine. They just want to let their hands go.

Mikaela Mayer can trash talk with the best of them. The reigning Ring, IBF and WBO junior lightweight champion has not been at a loss of words during the lead up to her eagerly anticipated unification bout with WBC titleholder Alycia Baumgardner, which takes place at the O2 Arena in London. The pair have traded verbal barbs for months now.

However, the 32-year-old Mayer is a fun interview and has plenty of other things to say. The Colorado-based Californian is fully aware of the importance of this all-female double header – Claressa Shields and Savannah Marshall clash for the undisputed middleweight championship on this card – and she is primed to make the most of her British debut.

“I really enjoy that the U.K. fans are die hard when it comes to boxing,” Mayer told The Ring before leaving for London. “It’s different to here in the United States where football runs the show. In the U.K., boxing seems to be like one of your top two sports – you’ve got soccer and boxing. I’ve been wanting to get in the ring and perform for my U.K. fans.

“The businesswoman that I am, I would be stupid not to tap into this market. The people in the U.K. are really welcoming when it comes to women’s boxing; they’re embracing us. I want to get my face in front of them and see what I can do on that side of the pond. It’s been a progression.”

Mayer (17-0, 5 KOs) has also made a name for herself in the punditry world. Knowledgeable, earnest, well-spoken and photogenic, the champion has done a great job as an expert analyst on both sides of the pond.

“At first I was a little nervous, I’d never done it before,” acknowledged Mayer. “My first time commentating, I was thrown on ESPN – the biggest sports network in the world – with pros who’ve been doing it so long. But over time I realized that my opinion is just as valid, if not more [valid], considering I’m in the ring doing or training to do what I’m sitting back and criticizing, right?

“I have a different perspective, and coming from the background that I do, with coach Al [Mitchell], and him being such a technician, I’ve really been able to use what he’s taught me when it comes to breaking down opponents and studying tape. A lot of the things that I’ve predicted have come true. I’m honest and blunt at times, but I think the U.K. fans appreciate that. They appreciate it a little more than the Americans (laughs), but that’s cool.” 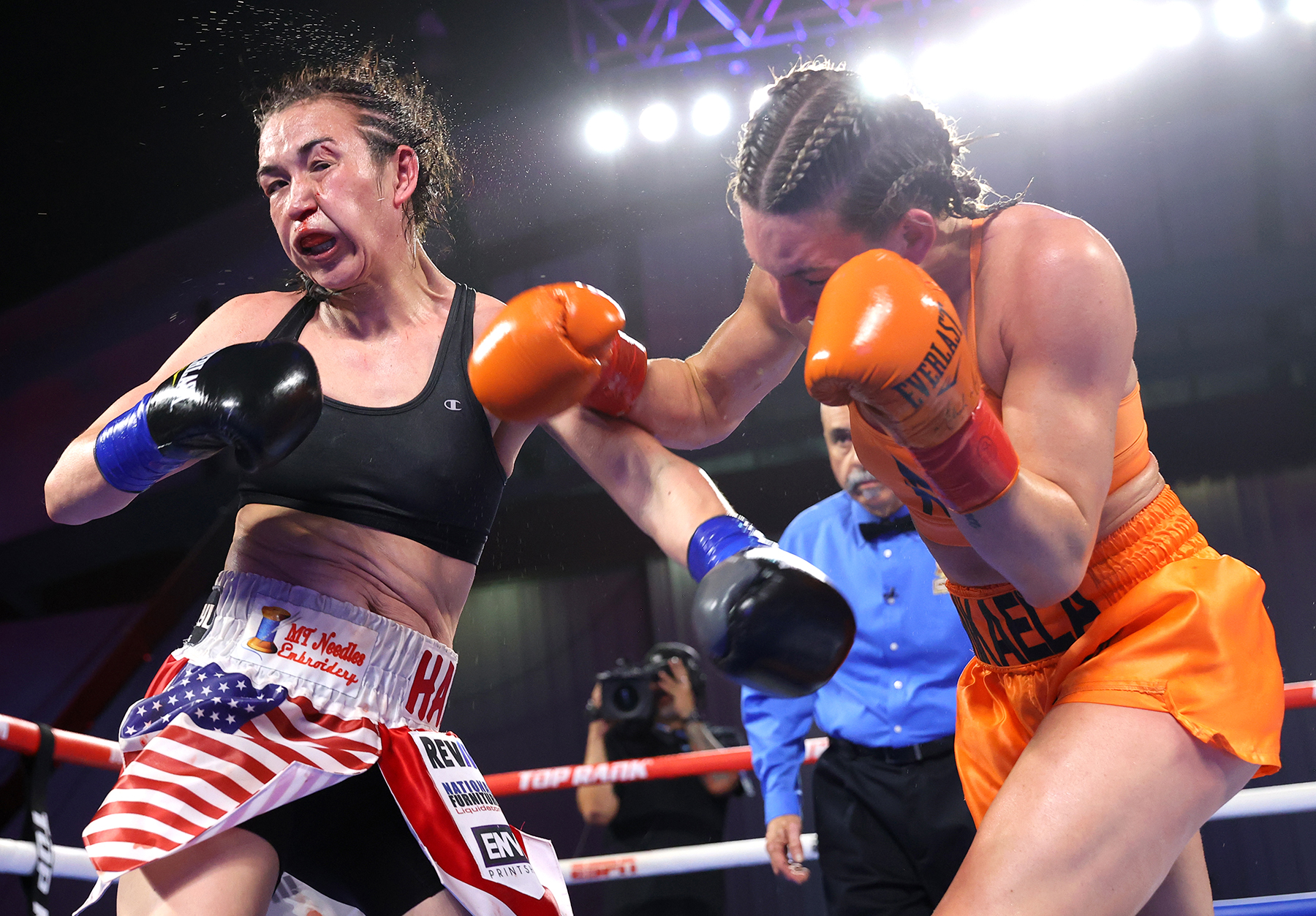 Many feel that the 12-1 Baumgardner could be the toughest test of Mayer’s career to date.  The hard-hitting Ohio native relieved Terri Harper (TKO 4) of the WBC title last November, transitioning from relatively unknown contender to elite-level player. However, it must be said, Baumgardner looked less destructive in her maiden defense against Edith Matthysse (UD 10).

“I think she’ll be a really good boxer one day, a more well-rounded boxer, but she’s not well-rounded enough yet,” offered Mayer. “I’m going to take her into those uncomfortable spaces, and I don’t believe she’ll know how to handle it because she would have shown it against Matthysse. She would have said, ‘OK, I’m not landing my big right hand on this girl, but she’s got nothing for me, I’m gonna press her and take it to her.’ She didn’t do that, so it makes it pretty easy for me to know what her game plan is. We know what she’s gonna do, but unfortunately for her, she doesn’t know what I’m gonna give her. I can do more things.”

Mayer is so confident of victory that she’s already looking past Baumgardner. While Hyun Mi Choi may not be a household name, she is the holder of the WBA 130-pound title, which would be the only governing body prize not in Mayer’s possession should she prevail on Saturday.

However, the unbeaten Korean is proving to be very elusive outside of the ring.

“I’ll go straight for Choi,” said Mayer, who has been targeting the undisputed distinction for years. “I’d want it in December; that’s how fast I’m willing to go back into camp to get this fight made. December or early-January at the latest. And if it doesn’t happen then – peace – I’m going up to 135. I’m not going to sit around and wait for these girls. Undisputed is a goal of mine, but it’s not the only goal.

“It would be a shame [if I don’t get the chance]. I don’t know what’s wrong with Choi. She’s avoided all offers, not just from me, but from Baumgardner’s team as well. Nobody can get a fight with this girl. I don’t understand why the WBA hasn’t stripped her. She’s not fighting anyone of status. She’s 19-0 and the longest reigning champion in boxing (2014-2022). Who are you fighting? If she declines another offer, she needs to be stripped.”

And if Mayer does make history by becoming undisputed champion, will that be enough for her? Will she trade in her boxing gloves for a mic and sit safe at ringside full time?

“I’ve been constantly climbing up that pound for pound list, moving up with every win,” Mayer said defiantly. “I believe I have what it takes [to be number one]. I just need to keep taking on the best and getting these wins under my belt. I believe I’ve done a really good job and I don’t shy away from anyone. I get fights made.

Mayer-Baumgardner, Shields-Marshall, plus undercard action will be broadcast by ESPN in the U.S. and Sky Sports in the U.K.

YOU MAY HAVE MISSED

MIKAELA MAYER: BAUMGARDNER IS ONE-DIMENSIONAL, I’M GOING TO EXPOSE HER

10 the reason why Fury vs. Joshua ought to (however most likely will not) occur subsequent