LAS VEGAS — You have the impression that Canelo Alvarez and Gennadiy Golovkin would chase each other through the depths of hell if they could. They brought out the best and the worst in each other. They became their ultimate inquisitors.

What no one saw was an emphatic winner when Alvarez and Golovkin clashed the previous two times.

They saw that Saturday night at the T-Mobile Arena.

Alvarez-Golovkin will be placed in the historic context of the all-time great trilogies of boxing history with Ali-Frazier, Fury-Wilder and Gatti-Ward. But it’s Alvarez’s name that will be placed on top thanks to a comfortable victory over the brave 40-year-old power puncher from Kazakhstan.

“He’s a really good fighter. He’s strong. That’s why we are here,” Alvarez said. “I’m going to keep forward, keep my legacy going. First round, I knew he’s tough. He’s a tough fighter. I need surgery, my left hand is not good. But I’m good, I’m a warrior, that’s why I’m here. I can’t hold a glass. It’s really bad. But I’m a warrior.”

Golovkin (42-2-1, 37 KOs) has always demanded answers of Alvarez. This time his questions received thudding answers in the form of hammering rights and left hooks. Golovkin’s mannequin eyes were drained of any life.

The late start “was a tactical mistake on my part to start slow,” admitted Golovkin afterwards. “But on the other hand, we wanted to see how the fight was going to develop, both of us. We did some recognizance and that recognizance probably waited too long for me.”

Alvarez had problems for days after his decision loss in May to WBA light heavyweight titlist Dmitry Bivol. He beat himself up for not following the tenets that have made him a Hall of Fame fighter. 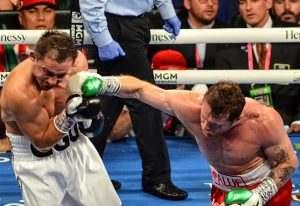 Someone had to pay.

That someone was “GGG.”

“You know for this – everybody knows – this is high level, the best fight for boxing,” Golovkin said. “Look at his face. Look at my face. It’s high level. Because we trained well, and this is shows that we did a very good fight, very good quality.

When asked how different this fight was from the first two, GGG replied, “This fight is so smart. More tactical, like chess.”

With 1:59 left in the first, Alvarez landed the first significant punch, and midway through the first, dropped a right to Golovkin’s body. As the opening round counted down, chants of “Mexico, Mexico, Mexico,” erupted from the partisan Alvarez crowd that filled the T-Mobile Arena.

With 2:09 left in the second, “Canelo, Canelo, Canelo” chants reverberated through the building. With :50 left, Alvarez gave them good reason, when he nailed GGG with a right to the body.

Through the first three rounds, Alvarez was letting his hands go, while GGG looked every bit the weathered 40-year-old. With 1:18 left in the fourth, an Alvarez left hook found Golovkin’s face. When GGG did release his hands, he looked slow. His timing was off. He had no rhythm nor concerted attack.

Canelo landed a vicious right to the body with 2:29 left in the fifth. If anything, it seemed as if Alvarez was giving Golovkin too much respect through the first five rounds. It appeared, if he wanted, he could have charged straight through the aging former middleweight titlist.

In the closing seconds of the fifth, Alvarez slammed a looping right that caught Golovkin in the face. And you sensed the confidence beginning to brew. Alvarez began getting closer and throwing his punches with more intensity. 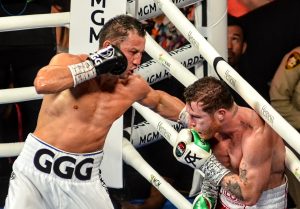 Golovkin had his moments down the stretch of the fight. Photo by German Villasenor

By the seventh, it began to get monotonous. Alvarez kept coming forward, resetting when he wanted, with no resistance coming from Golovkin.

GGG momentarily came to life in the ninth, showing his vintage side, setting up a right with a jab.

Golovkin followed with another strong 11th. He had to know he was seriously behind and had to stop Alvarez if he had any way of winning.

“It didn’t surprise me,” Canelo said about GGG coming on late. “I know him. He’s a strong fighter. For me I’m just glad to share the ring with him. He’s a really good fighter. I’m glad to be involved in that kind of fight.”

GGG’s late charge was just that—late. Alvarez did not fulfill his promise of a knockout. But he did close the trilogy with an emphatic victory that left no doubt.

Afterwards, the two future Hall of Famers hugged and spoke about their appreciation for one another, forever linked like Ali-Frazier, Fury-Wilder and Gatti-Ward.

Joseph Santoliquito is an award-winning sportswriter who has been working for Ring Magazine/RingTV.com since October 1997 and is the president of the Boxing Writers Association of America. He can be followed on twitter @JSantoliquito [twitter.com].

10 the reason why Fury vs. Joshua ought to (however most likely will not) occur subsequent