One of the finest young fighters in world boxing returns on Friday.

“He’s a solid fighter, you can’t take nothing away from him,” Stevenson (18-0, 9 knockouts) told The Ring. “You know he’s going to bring his best come fight night. I’m ready to put on a show.

“I think it’s a win situation all around. I think I’m about to go in there and do my thing.”

The 25-year-old southpaw is respectful of his opponent but ultimately feels that his superior skills will be decisive.

“I think his strength is he’s an Olympic gold medalist; he’s got a solid boxing I.Q.; he’s not just rushing in there and being dumb – I’ll give him that,” explained Stevenson.

“I think his weakness is he has more of an amateur style, where he’s a front-runner. I think he starts off fast, but as the fight goes on, he slows down and then I’ll take over. I don’t think he can do anything to stop me. I think it’s a great fight, but I’m on a whole different level.”

This will be the first time Stevenson has fought in his home city since he knocked out Albert Guevara in three rounds in July 2019. Since then, his star has ascended to new heights and he’s become a two-weight world champion.

“The last time I fought in Newark, I wasn’t the person I am right now,” he said. “I think I’m a way better fighter.

“I’m not really too focused on [fighting at home.] I think that I’ll leave my team to worry about the tickets and that. I’m more focused on fighting and putting on a show.”

Stevenson is coming off arguably the best performance of his career – a virtuoso 12-round unanimous decision win over Oscar Valdez to capture the WBC title.

“It was a beautiful display of boxing,” said Stevenson. “I think I showed a lot of skill in that fight. I picked him apart.

As well as collecting WBC laurels from Valdez, Stevenson also added the vacant Ring championship to his growing collection. He became the publication’s first champion at 130 pounds since Manny Pacquiao in 2008.

“I think The Ring Magazine is my favorite belt,” said Stevenson. “You ain’t got to pay anything on that belt and all of the greats had that belt. It ain’t like no made-up belt, it’s one of the most respected belts in boxing.” 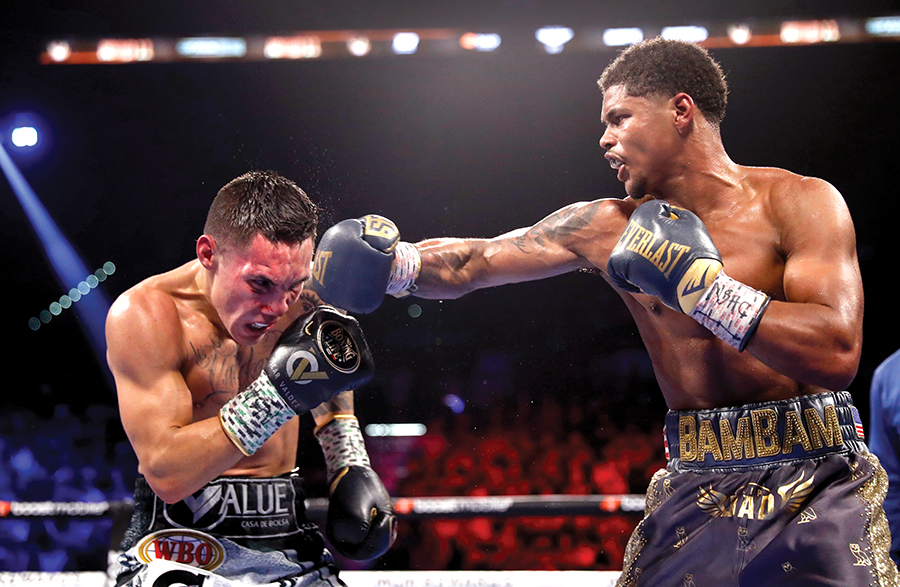 Valdez was no match for Stevenson’s talent, size and ring savvy. Photo by Steve Marcus/Getty Images

Providing he’s victorious, the next step in Stevenson’s career could be unification bouts with either IBF counterpart Joe Cordina (providing the Welshman gets past Shavkatdzhon Rakhimov) or WBA ruler Hector Garcia. However, Stevenson is not sure how much longer he can make 130 pounds.

“I can’t give you an answer on that, I’ll have to see when I finish my weight cut,” he said. “I don’t know how hard the weight cut is going to be.

“I would love to go undisputed by grabbing each belt, one by one. But if I can’t do the weight, I’m not going to force myself to go down in weight when I really don’t have to. I’m taking each fight as it comes.”

The lightweight division is brimming with talent and that will likely be Stevenson’s new home within the next year, but, for now, he’s not getting ahead of himself.

“We’ve got Robson Conceicao and he’s no slouch, so I’ve got to take him very serious,” said the champion. “I’m not too focused on 135. Once I get there, then we’ll put our focus on it.

Conceicao (17-1, 8 KOs) fought at the 2008 and 2012 Olympics before winning gold at the 2016 Rio Games. The Brazilian worked his way through the ranks as a professional and gave then-WBC titlist Oscar Valdez fits before losing a contentious 12-round unanimous decision. He has rebounded strongly, taking Xavier Martinez’s unbeaten record by lopsided 10-round decision.

Stevenson-Conceicao, plus undercard fights, will be shown on ESPN. The broadcast begins at 10 p.m. ET/ 7 p.m. PT.