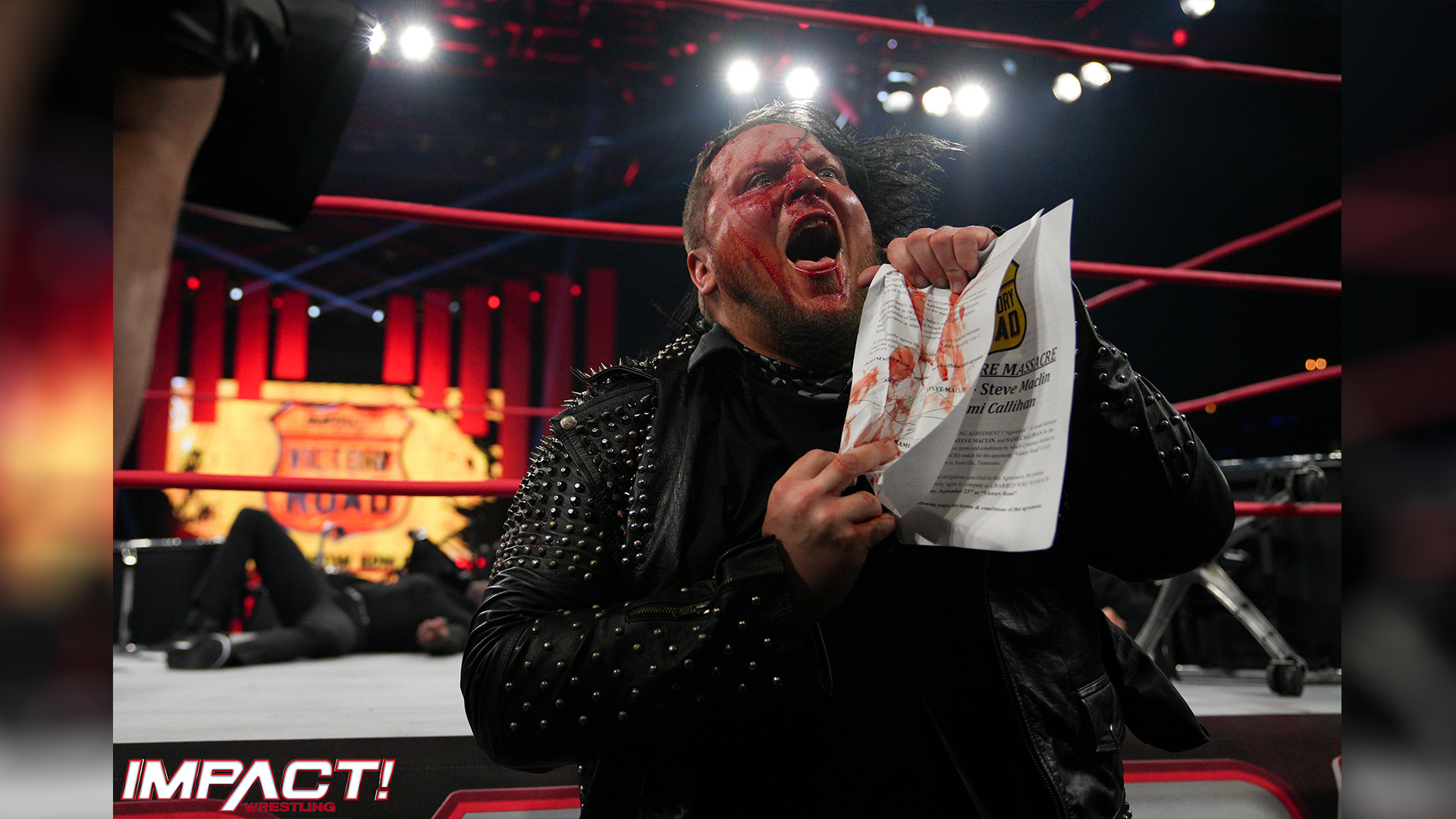 Stream this episode of IMPACT! on-demand

The action begins Before the IMPACT with an exclusive match!

Before Gisele Shaw attempts to end the legendary career of Mickie James at Victory Road, she battles IMPACT newcomer Hyan! Mickie James joins Tom Hannifan and Matthew Rehwoldt on commentary as she prepares to battle Gisele Shaw in a career-threatening match at Victory Road. Hyan has Shaw reeling in the early going as she hits a modified back suplex. Shaw turns the tide with a thunderous running clothesline. Shaw continues the attack with a running uppercut for two. Shaw sends her face-first into the corner turnbuckle before confronting James at ringside. Hyan dumps Shaw off her shoulders, then hits a jumping leg drop for a near fall of her own. Shaw counters into a Crucifix Bomb, followed by her signature knee strike to win!

Just 24 hours away from Victory Road, an all-new IMPACT! is on the air.

The Digital Media Title is suspended high above the ring, the first person to climb a ladder and retrieve it will be the Digital Media Champion! Gujjar gains the early advantage with a Samoan Drop. Gujjar attempts the Gargoyle Spear but Myers cuts him off in mid-air with a knee strike. Myers delivers a back suplex on the apron. Myers climbs the ladder but Gujjar pulls him off and drops him with a cutter. Gujjar successfully hits the Gargoyle Spear, sending Myers crashing into the ladder. Now Gujjar is climbing the ladder when Myers tips it over. Myers hits an Irish whip into the ladder, followed by the Roster Cut Clothesline moments later. There are now two open ladders in the middle of the ring as both men race to the top. Gujjar gains the upper-hand, sending Myers crashing to the floor below. Myers regains his composure and hits a back suplex off the ladder. The fight spills to the outside where Myers powerbombs Gujjar into a ladder that’s propped on the steel steps. Myers hits a low blow, then tapes Gujjar to the ladder. Myers climbs up and retrieves the Digital Media Title to win!

Heath apologizes to IMPACT World Champion Josh Alexander and Rich Swann for inadvertantly costing them the IMPACT World Tag Team Titles last week. Tomorrow night at Victory Road, Heath joins forces with Alexander and Swann as they battle Honor No More’s Eddie Edwards, Matt Taven and Mike Bennett in a six-man tag team match. But tonight, Heath wants to go it alone when he issues a Street Fight open challenge to any member of Honor No More.

We see footage from last Saturday’s Wrestling Revolver event in Clive, Iowa where Steve Maclin blindsided Sami Callihan, leading to an explosive brawl between the two!

Jordynne Grace looks to make an example out of Zicky Dice as she prepares to face Masha Slamovich’s handpicked opponent tomorrow night at Victory Road, Max the Impaler! Grace immediately takes control from the opening bell and hits the Grace Driver to score the dominant victory.

Father James Mitchell is ready to unleash Max the Impaler!

Before the returning Triple Threat Revolver determines who will challenge for the X-Division Title at Bound For Glory, five of its competitors collide in this free-for-all! Yim hits Zayne and Miguel with a double dropkick off the second rope. Taurus confronts Yim in the middle of the ring. Yim doesn’t back down but Taurus makes her pay with a vicious headbutt. Kid soars off the top rope and hits Taurus with a Hurricanrana on the floor. Yim is the next to fly as she takes out everyone with a top rope Swanton Bomb to the outside. Zayne uses Taurus as a launchpad to pick Kid and Miguel off the top with a double Hurricanrana. Zayne hits Baja Blast on Taurus for two. Yim powerbombs Zayne, then spikes him with a Package Piledriver for a very close near fall. Kid crashes and burns on a top rope corkscrew attempt. Taurus spears Kid, then connects with Destination Hellhole on Zayne to win!

Eric Young and Deaner assault their loyal followers as the revival of violence arrives.

Say his name and he appears – Joe Hendry is coming soon to IMPACT Wrestling!

Heath is in the ring to challenge any member of Honor No More to a Street Fight. Out comes their monster, PCO, but the rest of Honor No More soon interrupts as Eddie Edwards denies him of the opportunity. Heath riles up PCO, and he pushes through his allies to accept the challenge!

Heath his a slingshot crossbody to jumpstart the match. Vincent blindsides Heath, allowing PCO to gain control with a running clothesline. PCO hits a neckbreaker on the steel ramp, followed by a leg drop. The fight spills into the crowd as Heath hurls a chair at PCO’s head. Heath baits PCO into a DDT on the stage. Heath then throws PCO off the stage into a pile of steel chairs. Honor No More returns to ringside but as they surround Heath, IMPACT World Champion Josh Alexander and Rich Swann make the save. Alexander locks in the Ankle Lock on his Bound For Glory challenger, Eddie Edwards. Vincent blindsides Heath with a steel chair shot but Heath turns the tide with the Wake Up Call. PCO emerges and fills the ring with more chairs. PCO hits a chokeslam, then locks in the Mandible Claw. Heath avoids the follow-up PCO Sault, sending PCO crashing into the bed of chairs. Heath hits the Wake Up Call into the chairs to win!

Two of the greatest tag teams in professional wrestling collide with the winners earning a coveted IMPACT World Tag Team Title shot against Matt Taven and Mike Bennett at Bound For Glory! The Guns deliver a double superkick to Fletcher, then take out both members of Aussie Open with high-flying offense from the apron to the floor. Davis avoids a top rope foot stomp from Shelley, allowing Aussie Open to gain the advantage by driving the Guns back-first into one another. Fletcher and Davis hand off Shelley from one vertical suplex position to another before Fletcher drives him down to the mat. After several minutes of domination from Aussie Open, Shelley avoids an incoming senton from Davis, allowing him to tag in Sabin. The pace quicken as Sabin goes on the attack, taking out Davis with a slingshot crossbody on the floor. Sabin continues the assault with a top rope crossbody to Fletcher in the ring. Sabin dropkicks Fletcher into a Flatliner from Shelley for a very close near fall. Fletcher hits a Michinoku Driver out of nowhere, followed by an assisted cutter to Sabin but Shelley breaks the pin. Sabin fights out of the Coriolis, allowing the Guns to hit Skull and Bones on Davis to win!

Gia Miller interviews Tasha Steelz ahead of her Victory Road matchup against Killer Kelly. Tasha says that she’s going to introduce Kelly to her friend and points to a steel chair that Savannah Evans is holding. Evans mysteriously disappears as Kelly confronts Tasha head on. Tasha says that they’re going to play, but not until tomorrow night at Victory Road.

Gisele Shaw says that Mickie James will make her most important contribution tomorrow when she passes the torch to Gisele Shaw. If Shaw is victorious in their match tomorrow night at Victory Road, Mickie’s career will be over.

IMPACT Executive Vice President Scott D’Amore presides over the Hold Harmless Contract signing between Sami Callihan, Moose and Steve Maclin for their Barbed Wire Massacre match tomorrow night at Victory Road. By signing the contract, the competitors agree not to hold IMPACT Wrestling or each other responsible for their actions. Moose and Maclin are in the ring but when Callihan’s music hits, he’s nowhere to be found. Moose turns his attention towards Maclin and tells him that his experience as a Marine is nothing compared to being in the ring with him. Maclin fires back and says that Moose hasn’t done the things he’s done or seen the things he’s seen and at Victory Road, it’s not going to be hell on earth – it’s going to be “Mayhem for All”. Callihan finally makes way to the ring to tell Moose and Maclin that they made a grave mistake by aligning with one another in an attempt to take him out. Callihan calls himself the master of puppets and says that he has Moose and Maclin at each other’s throats heading into Barbed Wire Massacre. Following Moose and Maclin, Callihan is about to sign the contract when Maclin jabs a pen into his head. Maclin is about to have Callihan Caught in the Crosshairs when Moose cuts him off with a Spear, bringing their short-lived teamwork to an end. Callihan sends Moose through a table, then spikes him with the Cactus Driver 97. Callihan signs the Hold Harmless Contract in blood as IMPACT! goes off the air.