Connect with us
crossorigin="anonymous">

Stevenson connects during his thrilling encounter with Badou Jack in 2018. (Photo by Steve Russell/Toronto Star via Getty Images)

Adonis Stevenson ripped up the script in the summer of 2013 when, as the underdog, he knocked out Chad Dawson with one punch in the first round to annex the Ring and WBC light heavyweight championship. It was selected in our readers poll as the Knockout of the Year. Stevenson went on to make nine successful defenses over a five-and-a-half-year period in the 2010s.

“I didn’t meet my father; he died when my mother was pregnant with me,” Stevenson told The Ring. “When I was a kid, I always said, ‘Why has my father died?’ It was very difficult. You grow up without your father. My mom was my mother and father. She did everything for me. She worked a lot; she’s a fighter.”

In search of a better life, Stevenson’s mother moved the family to Canada when Adonis was 7 years old. It was quite a change for the young Haitian.

“The weather was a shock,” he said. “People were telling me the winter was cold, but me, in my head, I was thinking, ‘That’s nothing. That’s easy work for me.’ I had to get a jacket, hat. I had to put boots on my feet. It was cold. I was like, ‘How do human beings live here?’”

But live he did — and he was never far from trouble.

“I didn’t finish school,” said Stevenson. “I was in trouble on the streets. I was a street guy. I was in a gang but didn’t stay long; there was one boss but I don’t like people to control me.” 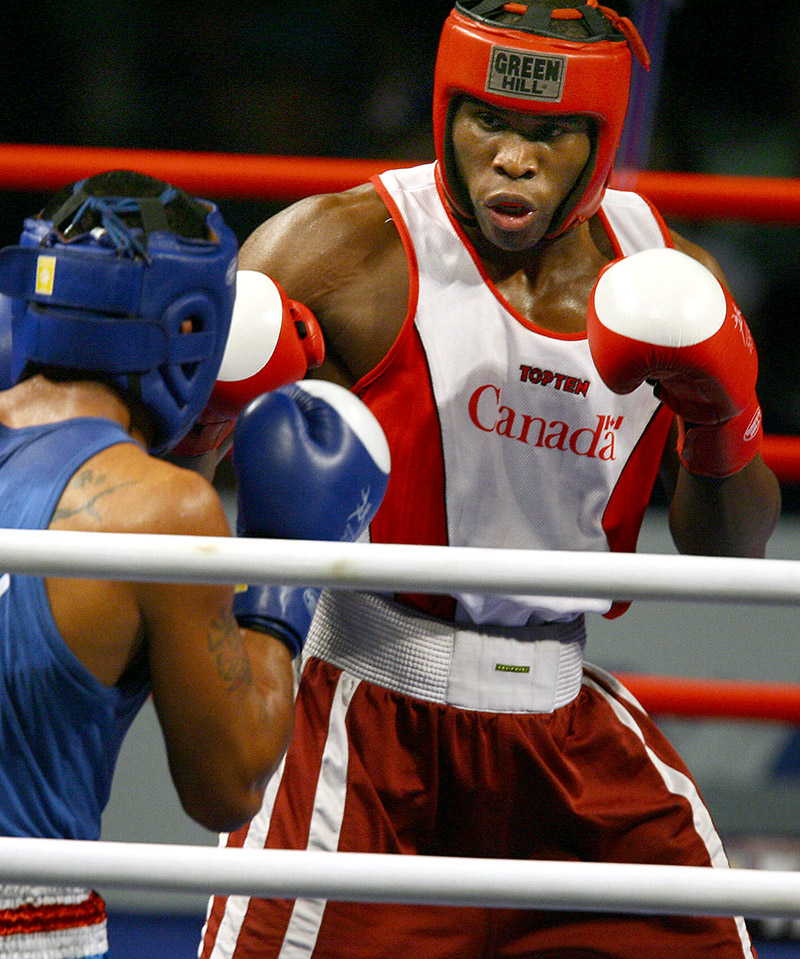 Stevenson battles Samoa’s Warren Fuavailili during their middleweight semifinal bout at the Commonwealth Games in 2006. (Photo by EMMANUEL DUNAND/AFP via Getty Images)

Stevenson worked in a factory but hustled for money on the streets, becoming more involved in criminal activities.

“There was one guy who manipulated me; everything he said, I’d do. He controlled me,” said Stevenson. “They said I was a pimp. He came to me and got the girls to give me the money, and I gave him the money. He used me. After I look back, I was naive.”

His nefarious actions eventually caught up with him, and Stevenson went to Bordeaux Prison in Montreal for assault, issuing threats and working with prostitutes. He served 18 months of a four-year sentence.

“I saw a lot of people who were in the prison, they’d go out and come back,” he recalled. “I asked one of the officers: ‘I saw him a couple of days ago; he was in jail, he came out and he’s come back. How come?’ The security guard laughed and said, ‘Don’t worry, you will come back. They always come back.’ I looked at him and said, ‘When I go out, I’m never going to come back again — never.’ He laughed.”

With steely determination, Stevenson took up boxing when he got out of prison in 2001. He won the Quebec championship in 2004 and then the Canadian national title in 2005 and 2006. He represented Canada at the Commonwealth Games in Melbourne and won silver in 2006. His performance prompted renowned promoter Yvon Michel to sign him. Stevenson turned professional at the relatively late age of 29 in September 2006.

The super middleweight knockout artist progressed quickly, winning the Canadian title in his 10th outing. However, after going 13-0 with 10 KOs — seven of them in the opening round — he made his American debut fighting for Lou DiBella and was stopped in the second round by dangerous journeyman Darnell Boone.

“I underestimated him and [didn’t take] him serious,” admitted Stevenson. “He shocked me. It was hard. I got written off. I had to convince Yvon. He said OK and gave me a second chance.”

In 2012, he became one of the great Emanuel Steward’s pupils. The two quickly bonded and Steward helped Stevenson move to the next level. The the power-punching southpaw dispatched Steward protege Jesus Gonzales (KO 1) and world-rated Noe Gonzalez (TKO 2), then stopped Don “Da Bomb” George (TKO 12) in an IBF eliminator.

When Steward passed away in the fall of 2012, Stevenson worked with his late trainer’s nephew, SugarHill. 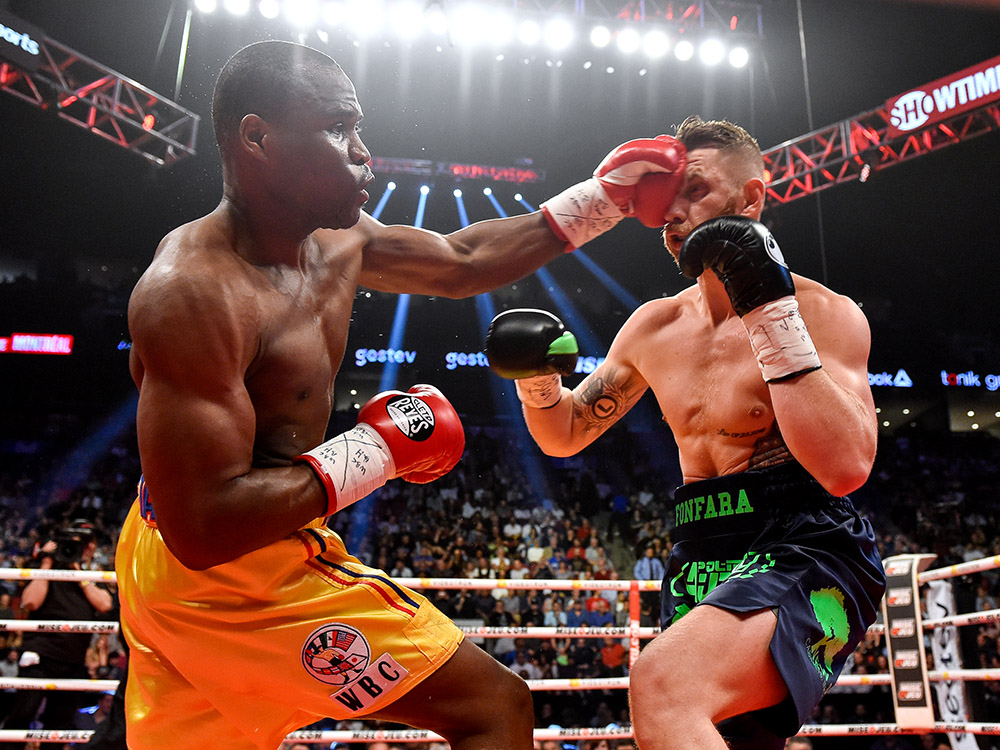 Stevenson says he was impressed by Andrzej Fonfara’s intelligence in the ring. (Photo by Minas Panagiotakis/Getty Images)

Although he was Carl Froch’s mandatory challenger, Stevenson lined up a fight with Ring/WBC champion Chad Dawson. But first, he decided he needed to get the Boone loss out of his system for good.

“[Boone] was talking a lot, talking shit, saying, ‘He’s going to fight for a world title but doesn’t have time to fight me,’” said Stevenson, who brutally gained revenge by knocking Boone out in the sixth round. “I didn’t need to, but I did. I said to Yvon, ‘Please, I have to fight him. He’s talking so much shit about me. Any fight I have, he’ll be like, ‘Adonis is fighting him? Ha! I beat Adonis.”

“Yvon said, ‘Fighting this guy doesn’t mean anything, and you’re going to risk it? You have everything to lose.’ It was my honor. I told him I would fight for free. He got me once, but he’s not getting me a second time.”

That led to Stevenson facing Dawson in Montreal in June 2013.

“I was supposed to be easy for him,” said Stevenson, laughing. “I practiced that kind of punch thousands of times. He’s southpaw and I’m southpaw; when you throw the left hand, it will be fire. I tried one time to get the distance, and the second time I got it. 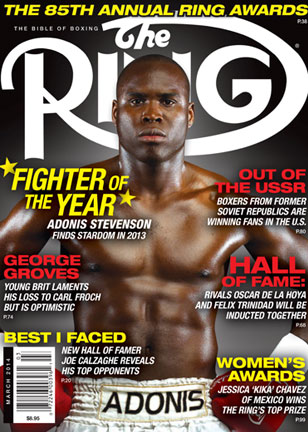 “It was a dream come true for me. I was not supposed to be a world champion. People were saying, ‘You’re an old man. You’re going nowhere.’ I shocked the world. My life changed in 76 seconds.”

“Superman” rounded out the year with successful title defenses over former titleholder Tavoris Cloud (TKO 7) and future cruiserweight titlist Tony Bellew (TKO 6) to close out 2013. On the strength of those accomplishments, Stevenson was named The Ring’s 2013 Fighter of The Year.

The Bellew fight was on HBO as part of a doubleheader with WBO beltholder Sergey Kovalev. It was hoped they would meet in the new year. However, Stevenson made a business decision to sign with the influential Al Haymon and moved to Showtime.

Stevenson held off the late charge of Andrzej Fonfara (UD 12) in 2014, but critics began to complain about him facing the likes of Dmitry Sukhotskiy (KO 5) and Tommy Karpency (TKO 3).

“People always have something to say when it comes to my opposition,” he said. “Boxing, as you know, is not an easy sport at the professional level, and everyone has their different talents. I tend to not pay attention to what people have to say.”

Stevenson went a long way toward silencing those detractors when he engaged with two-division titleholder Badou Jack in a thrill-a-minute war in May 2018.

“I think it was an incredible fight,” said Stevenson, who had to settle for a 12-round draw. “When he stayed on his feet [after I hurt him with a left hook to the body in the fifth round], I was like, ‘It will be a long night.’

“People aren’t used to seeing me going 12 rounds – I usually go for the KO. This time, people really got to see my endurance and resilience and the fact that I just don’t give up.”

Stevenson then met his mandatory challenger, Oleksandr Gvozdyk, in Quebec City in December 2018. It was a contest that ended with Stevenson going down under a barrage of punches in the 11th round.

“I was dominating the fight,” he said. “I lost. But it’s boxing.

“I go to the bathroom and had a shower and I get out; I was feeling like my head was not good. I was not comfortable. I felt a pain in my head. I went to the hospital, and then I had the operation.”

Stevenson had suffered a severe brain injury and spent three weeks in an induced coma. When he finally woke up, he found himself at the start of a long and difficult road.

In 2019, Stevenson was honored at the WBC convention and named the WBC Champion of Hope.

Stevenson, now 45, has five children and lives in Laval, Canada.

He graciously took time to speak to The Ring about the best he fought in 10 key categories.

Badou Jack: “He gets the jab out, the timing; he’s patient. It was a swift jab.”

Jack: “He had a good defense, too. He can block the punch.”

Chad Dawson: “I could see his jab was very quick.”

Oleksandr Gvozdyk: “He moved around the ring very well.”

Andrzej Fonfara: “When I fought the first fight, he let me punch him, he kept blocking and was waiting for a good moment. He was very wise, waiting for his moment. When his moment came, he caught me and I realized everything he was doing was to wear me down. My energy was going and he knew it. He saw the opportunity, he caught me and [I went down, then] I got up.”

Fonfara: “He’s big and very strong physically. He walked around at 200 pounds.”

Dawson: “I could feel his power, and he also disrespected me. I said in my mind, ‘I have to finish him quick,’ before he got his rhythm.”

Sakio Bika: “I don’t think there was a boxer who knocked him out. I hit him clean, he went on the floor and he got up. He had a good defense, but he had a good chin. When you punched him in the head you felt the punch in your hands. He’s got a chin!”

Jack: “He was a two-weight world champion. He brought the best out in me; we had a great fight.”

Special thanks to Nathalie Bruneau for making this story possible. The Ring appreciates her help.

Questions and/or comments can be sent to Anson at [email protected].

Holmes vs. Spinks: The grassy knoll for boxing conspiracy theorists
Candy D Recordsdata: Boxers should defend themselves always – each within the ring and out of the ring
crossorigin="anonymous">
%d bloggers like this: