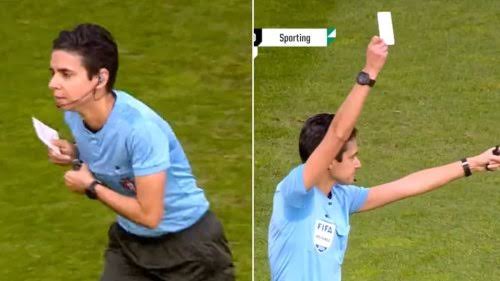 A white card was shown by a referee in charge of Saturday’s clash between rivals Sporting Lisbon and Benfica.

Yellow and red cards have been part and parcel of football for decades now, so the sight of a white card will look bizarre to pretty much every football fan.

The new card was shown shortly before half-time of the women’s fixture in Portugal.

Benfica were 3-0 up when the ref pulled the white card out and brandished it in the same way a match official would a yellow or red card.

Per JOE, this is the first time the white card has ever been used.

What is a white card used for in football?

According to The Sun, someone on the bench in the dugout fell ill at the end of the first half.

Medical staff from both sides subsequently rushed to the person’s aid.

Once the issue was dealt with, the referee then brandished the white card, much to the delight of fans inside the Estadio da Luz.

Unlike yellow and red cards, which punish teams for breaking football’s rules, white cards are designed to recognise and praise clubs for fair play.

Ref🏁 gives White Card ⬜ during a match between Benfica & Sporting Lisbon women on Saturday (21 January), the card was used for the very first time in professional football. pic.twitter.com/38QZ0ytDtE

Angel Fierro to face Eduardo Estela on March 4 in Mexico