This was by no means a vintage Spurs performance, but they got the win they desperately needed and Harry Kane took another step towards becoming a record-breaker.

Like a snowball gathering pace as it grows in size rolling down a hill, Spurs seem to have talked themselves into a crisis and the messaging is garbled.

Those on the outside looking in could be forgiven wondering who, exactly, is to blame for a season that has turned sour since the Premier League returned following its brief interregnum.

Is it Antonio Conte’s fault? Is it Daniel Levy’s fault? The players? All of them? None of them? It can be difficult to make out from the noise, at times.

Over the last three months, the news has become almost comically bad. Arsenal are pulling clear at the top of the Premier League. Christian Eriksen is already considerably closer to winning a Premier League winner’s medal than he ever was at White Hart Lane. Harry Kane is definitely leaving in the summer. Fabio Paratici is getting banned from football for 800 years. Spurs are going to sack Antonio Conte and make a surprise swoop for the services of the currently unattached Steve Bruce. At this stage, almost nothing could surprise you.

What is pretty much uncontestable is that over the last three months, form has fallen off a cliff. Going into a Monday evening trip to Fulham  Spurs had played ten games since beating Everton on October 15, of which they won three, drew one, and lost six. They arrived at Craven Cottage clinging onto fifth place by their fingertips. Brighton were two points behind them but with a game in hand. Fulham would go above them if they beat them.

The nation licked its lips at the prospect of Doctor Tottenham delivering another dose of Vitamin Spurs to cheer up a nation still trying to weigh up whether it should heat itself or eat. This felt like a match that could go beyond being a mere banana skin and into the territory of a self-fulfilling prophecy.

And for 44 minutes there they were, the familiarly jittery and shapeless Spurs who’ve apparently replaced the team that started their season with seven wins and two draws in their first ten games.

Hugo Lloris, who it’s difficult to believe was playing in a World Cup final just a few weeks ago, spilled a shot. Passes ran astray and little of note was created in attacking positions. Heung Min Son was booked – and might well have been sent off – for a retaliatory boot planted into the ankle of Kenny Tete. So far, so uninspiring.

But all it takes is one moment, when you have a striker of the calibre of Harry Kane in your team. Kane will never get the credit he really deserves. That’s probably impossible in The Age of the Bantersaur, and the contempt shown towards him feels all the more sharpened for the fact that he hasn’t done the decent thing and joined a Massive Club for the trophies and medals. Earlier in the day, it had been reported that Kane, whose contract is due to expire in 2024, may be open to staying with the club beyond then after all. 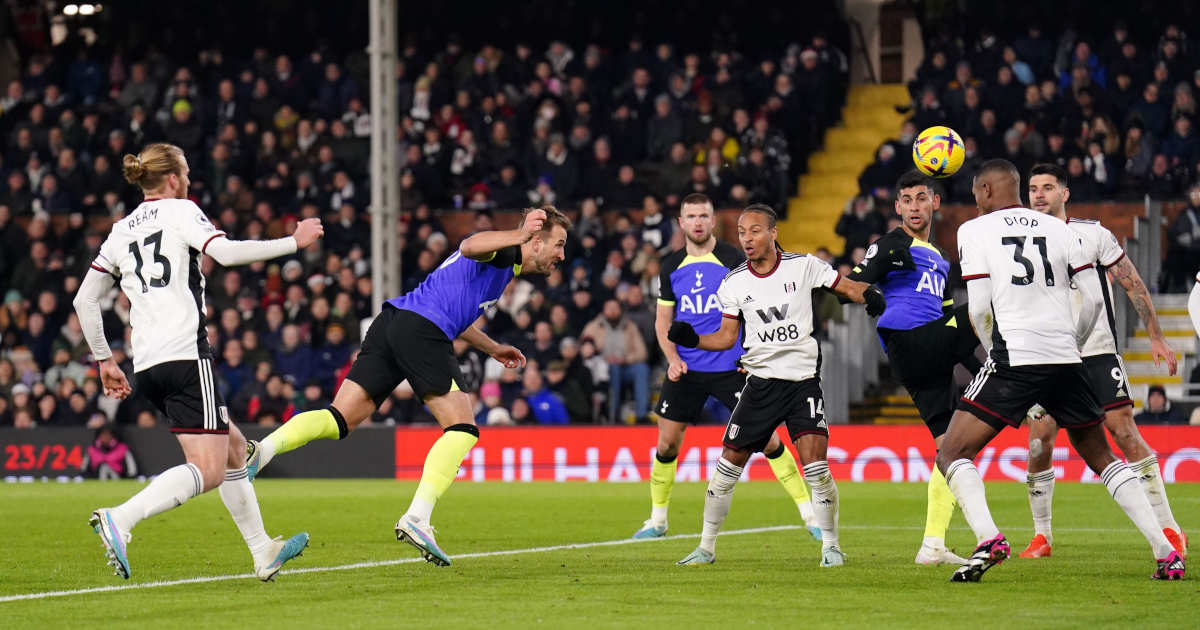 It’s strange to think how much the nature and tone of this sort of conversation has changed over the last two or three decades. When it used to come up over players such as Steve Bull or Matthew Le Tissier, who could have taken a step up but didn’t, opting to stay with one club for almost the whole of their careers, used to be about the clash between loyalty and success. Harry Kane discourse barely seems to have touched upon that, though. Loyalty doesn’t matter any more, only the accumulation of trophies and medals.

Right on half-time, there he was. He’d done practically nothing for the previous 44 minutes and 59 seconds, a shot over the crossbar which was weak sauce by his own lofty standards but also as much as Spurs had mattered as they anaemically muddled their way through the first half. Picking up Son’s pass, he made himself a yard of space, swivelled, and swept the ball in to give Spurs a wholly undeserved half-time lead, a goal to tie him level with Jimmy Greaves on 266 as the club’s all-time top goalscorer.

He had chances to break the record, a header brilliantly saved by Bernd Leno and a low shot that fizzed just wide, but the second goal that the half wouldn’t really have deserved never arrived.

Marco Silva switched up his Fulham team but they didn’t create a great deal themselves, even when they were chasing the game in its closing minutes. Indeed, it might even be argued that this match wasn’t much of an advertisement for fifth versus seventh in the Best League In The World.

“We want Levy out” sang the travelling supporters as the final whistle blew. There was some audible support for Antonio Conte too, earlier in the evening. And considering that they got swatted aside by both Arsenal and Manchester City in their last two matches, they needed a win from somewhere. But this was a win and no more. The second half performance was solid enough, but there remains a sickliness to the pallor of their football at the moment.

Fulham are a good side, but they didn’t have a particularly good night at the office. Scrambling past them, it’s not difficult to see how the teams nearer the top of the table have managed to swat Spurs aside this season, and there was little beyond the result to get excited about. Emerson Royal did a tidy job in midfield. Had Kane not scored, he might have been a contender for man of the match.

But otherwise, Spurs didn’t look significantly improved upon recent weeks. It certainly didn’t look like the sort of performance that will suddenly spin the mood around the club on its head. But at least for now there’s still Harry Kane, their joint-record goalscorer of all-time. Jimmy Greaves is in good company at the top of that list.