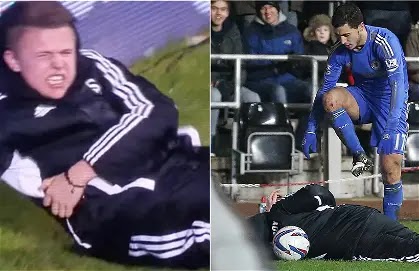 Hazard was shown a straight red card by referee Chris Foy following the bizarre incident during a League Cup clash at the Liberty Stadium in January 2013.

What happened between Eden Hazard and the Swansea ball boy?

The Belgian winger caught the young lad while attempting to retrieve the ball. Only a teenager at the time, Morgan appeared to be in considerable pain as he left the pitch while holding his side.

“The boy put his whole body on to the ball and I was just trying to kick the ball,” Hazard insisted after the two-legged tie, which Chelsea lost 2-0 on aggregate. “I think I kicked the ball and not the boy. I apologise.”

Four flavours are sold at Tesco stores UK wide, while Sainsbury’s and Asda will reportedly sell the product from October.

That time Eden Hazard got sent off for kicking a ball boy 😅#tbt pic.twitter.com/fynhHjft0r

The youngster took to Twitter to confirm that he’d spoken to Hazard and wouldn’t be pressing charges. South Wales Police also stated that no action would be taken against the former Lille star, who was 22 at the time.

Charlie, it turned out, was the 17-year-old son of Swansea director Martin Morgan – owner of the Morgans Hotel and worth a reported £65 million, according to The Sun.

In the aftermath of the Hazard incident, Charlie’s social media following went from 600 to 100,000. Several newspapers, meanwhile, revealed the youngster lived an ‘enviable lifestyle’ involving luxury holidays and flash cars.

Almost a decade later, however, and Charlie is now well and truly living the high life.

Three years after his clash with Hazard, Charlie realised his dream of setting up his own business after spotting a gap in the alcohol market.

Alongside his friend Jackson Quinn, the pair created Au Vodka – a vision that stemmed from watching their pals unwrap bottles of their favourite vodka on their 18th, 19th and 20th birthdays.

Per the Manchester Evening News (MEN), Au Vodka has gone from a one-time limited run of 2,000 bottles (sold to local bars in Swansea) to now manufacturing a remarkable 35,000 bottles daily over the past six years.

Four flavours are sold at Tesco stores UK wide, while Sainsbury’s and Asda will reportedly sell the product from October.

The brand has also gone international and can be purchased in 40 countries around the world, including Australia, Spain, the United States and Dubai in the United Arab Emirates.

The addition of Charlie Sloth – a British DJ, producer and TV presenter – was a game-changer for the company.

“Things really blew up for us in 2019 when Charlie came on board,” Jordan Major, Head of e-Commerce at Au Vodka, was quoted saying by Retail Sector in October 2021.